Yes, spring has finally really started. All flowers and plants bloom again. Unfortunately, for many people this also means that hay fever will come back on. A runny nose, dry throat and itchy and irritated eyes are well-known symptoms that recur annually. Hay fever is caused because the immune system reacts sensitively to allergens. Instead of pills, nasal spray or other medication, you can also try CBD so that the immune system gets a big boost.

1 in 5 Dutch people suffer from an allergy, such as hay fever. And the annoying thing about hay fever is that it cannot be said with certainty where the complaints come from. There are so many tree species, plants, grasses and pollen that people can react violently to. To get rid of complaints quickly, doctors often prescribe antihistamines and corticosteroids. These medications have a quick effect but lose their effect in the long term. This is not suitable for everyone because some people experience unpleasant side effects, but also people with a bad liver or kidneys should not use this medication. Fortunately, there is a natural alternative.

WANT TO GIVE CBD A CHANCE TO REDUCE HAY FEVER COMPLAINTS?

There is a natural alternative to enjoy a walk in the spring without sneezing all the time or having continuous eyes. Because CBD has an effect with our endocannabinoid system (ECS), more and more people are discovering the effect on hay fever and other allergies. The human body, like all other mammals, contains an endocannabinoid system (ECS) “Endo” means body own. These endo-cannabinoids respond to millions of endocannabinoid receptors throughout the body. These receptors act as signaling devices and therefore regulate all important processes in the body. Cannabinoids such as CBD have a connection with endocannabinoid receptors because of this CBD interacts with the ECS. The ECS functions as a regulatory system. It plays a role in the important organs, areas of the brain, nervous system and immune system. 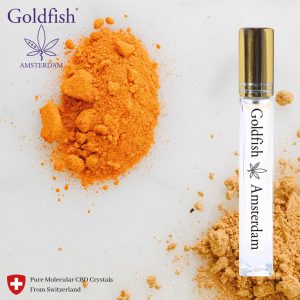 Goldfish Amsterdam 5% CBD with Turmeric Extract and MCT Oil is made with pure molecular CBD crystals from organically grown and fully certified hemp plants. Molecular CBD crystals are produced by supercritical CO 2 extraction. Turmeric is a spice made from the root of the Curcuma longa plant. In Asia, turmeric has been used as a spice in cooking for thousands of years. Today, turmeric is accepted as a dietary supplement and more and more people are discovering its unique properties. There are also more and more studies on turmeric such as: chronic inflammation in the body, an inhibitory effect on allergies, pain from rheumatism and whether osteoarthritis can contribute to high cholesterol. Turmeric is also used in any detox program for its enhancement of liver function. Turmeric is known as a powerful antioxidant. Goldfish Amsterdam 5% CBD in combination with turmeric extract and MCT oil is a unique food supplement.

We're here to help you!

We keep you posted!